Family » adoption » ICWA Abuse: Girl Tells Senate Staff she was given to a man at age of ten 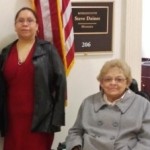 Where to begin? We met with staff members from seven DC Senate offices on Monday. We had come to talk about the Indian Child Welfare Act and how it infringes on the right of children and parents.

But sitting next to this young woman, who comes from the same reservation as my husband… I realized there is so, so much more we all need to talk about.

She told how she was abused and used sexually as a child. She said she was first given to a man at the age of ten. Her sisters were also given to men. She told how she begged to be allowed to return to the only family she had ever felt safe with – the foster family that the tribe, through ICWA, had taken her from. She told how she tried to run away over a dozen times – to get back to the foster home where she knew she was loved. She told how the home where the tribal govt placed her made her destroy pictures of the family she loved, and how they had cut a rope to save her when she had tried to hang herself. It was only then that they finally allowed her to return to her true home.

The feeling in Congress and across much of America is that the tribal leaders can’t be messed with. Don’t you dare step on their toes.

– Have you heard yet that the BIA had to go in and take over children’s services on the Spirit Lake Reservation?

– Have you heard about the “Native Mob” now active on reservations in three states?

One of the Senate staff members said her Senator would like to do hearings concerning Spirit Lake. I would love to see that happen – as well as inquiries into the gang activity and harm to children occurring on many reservations. Spirit Lake is not isolated. Leech Lake, Red Lake, White Earth, Pine Ridge – and more.

PLEASE CONTACT your Senators and encourage/support them in taking action. Many Senators are very afraid of stepping on the toes of tribal government – but while they cringe, girls as young as ten are being prostituted.

What this girl said today matches what I was told by another Leech Lake family last week. What they shared with us is horrific.

We NEED to let our Senators know that this is not OK in America. They MUST make is stop!

Children need to be protected. For our family, that also means getting rid of ICWA. You might not want to take that drastic a stand on the ICWA – but our family must. But at the very least – please press your Senator for hearings on the issue of child welfare and protection in Indian Country.

Please – especially press your Senator to do this if he/she is on the Senate Committee on Indian Affairs.

2) ASK YOUR SENATOR to contact Senator Cantwell’s office and press for hearings on Spirit Lake and other reservations were abuse of children is rampant!

3) PLEASE CONTINUE TO PRAY FOR THE CHILDREN, FOR US – AND FOR THE WORK IN FRONT OF US!

2 Responses to “ICWA Abuse: Girl Tells Senate Staff she was given to a man at age of ten”