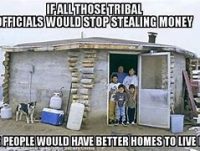 [CAICW Note: While Mr. Omdahl is correct concerning the extent of corruption, protest demonstrations by Native Americans will NOT make a difference. This was already done for many years and included occupations of Alcatraz, Wounded Knee and the BIA building in DC. All that these protests did was cause the death of several people and give certain powerful tribal leaders even more power through underhanded corruption involving federal officials – resulting in increased tribal corruption, oppression and abuse of tribal members. The protests did NOT improve quality of life for a large number of tribal members. In fact, things have only gotten worse.
… What needs to happen is for Americans across the board to demand a genuine end to federal sanction, encouragement and empowerment of tribal government corruption.]

Native Americans in North Dakota have been experiencing the same discrimination as the African Americans now demonstrating across America.

Hundreds of North Dakotas went to the streets to support African Americans even though we have only a few in the state. It was a demonstration of compassion worthy of the state.

In North Dakota, we shouldn’t think about the suffering of minorities without remembering that we have hundreds of Native Americans with grievances to redress.

In their recent demonstrations, the African Americans were fortunate in that they have been able to focus on a problem that was clearly identified. When it comes to Native Americans, our exploitation and their needs are general, making them difficult to rally societal support.

American Indians in North Dakota are faced with crisis living from the cradle to the grave. Their longevity is years behind whites; their educational system is second class; they experience chronic health problems; they are ill-prepared for off-reservation jobs.

And tribal councils fester with corruption, some highly paid and drawing double salaries, first as council members and second as economic development board members, or casino board members, or any other board that can be utilized. As they are feasting at the trough, their constituents are suffering all of the ailments of a Third World country.

If State Auditor Joshua Gallion was ever allowed on the reservation to identify the corruption in tribal operations, he would never be seen again. He would find at least 50 irregularities on each of the four reservations.

Patronage is still a big problem. Doreen Yellow Bird of the Fort Berthold Reservation once mourned about the rampant nepotism on reservations: “Employing people who support them allows leaders to stay in tribal government positions. Nepotism is hobbling program directors and law enforcement officers.”

And there is a worse kind of patronage in the form of foster care payments, patronage that has ended up with the deaths of several children in the past few years, one just weeks ago.

The problem involves the Indian Child Welfare Act that requires that foster children be returned to the tribe even though white foster parents have provided them with education, medical care and love that would not be available on the reservation.

And why would the tribe exercise the option of demanding children back? Why, Cousin George or Aunt Isabell needs the monthly stipend that goes with foster children. So children get passed around as patronage.

Writing in the Washington Post, the highly respected George F. Will called it “the blood stained Indian Child Welfare Act,” citing the case of a Methodist minister in Bismarck having to give up Indian foster children on the demand of the Spirit Lake Sioux, only to have one of them killed when a grandparent threw the child down an embankment.

Reservations are a curse for Native Americans who are not a part of the ruling cliqués. They are run like Central American republics, with the largesse consumed by a few at the top, and constituents who have little to say about tribal living.

All of the white man’s treaties should have been printed on toilet paper so they could have served some useful purpose. The promises were never kept. The most relevant one today is the assurance that the federal government would provide health care. Despite the chronic ailments suffered by Indians, federal health care was underfunded from the start.

Through the years, we have had study commissions, investigations, meetings with governors and senators, but nothing much has happened. To really solve problems will require money, and there will be no money until Native Americans can deliver huge demonstrations.

In the meantime, discrimination and deprivation on reservations will continue.