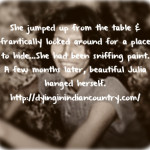 We are told time and again that the Indian Child Welfare Act (ICWA)  isn’t about race or percentages, but about preserving a dying culture.

There is much benefit in enjoying ones heritage and culture.

Everyone of us has a historical heritage. Some hold great value to it and want to live the traditional culture (to a certain extent. Few try to REALLY live traditional), others only want to dabble for fun – but others aren’t interested at all.

My children have the option of enjoying Ojibwe traditional, German Jewish, Irish Catholic, and Scottish Protestant heritage. We told them as they were growing up that each one of their heritages are interesting and valuable. (While at the same time making it clear that Jesus is the only way, truth and life.)

Most of us whose families have been in America for more than a couple generations are multi-heritage. Even most tribal members are multi-heritage. All individuals have a right to choose which heritage they want to identify with. If one of my children were to choose to identify with his or her Irish heritage, it would be racist for anyone – even a Congressman – to say that their tribal heritage was more important.

There are times to speak softly, and other times when people and situations need to be firmly set right.  This is a time for firmness. For those who think I don’t have a right to speak because I am not “native,” think again.  As long as you are claiming multi-heritage children, I have a right to and WILL speak.

Reality Check: It is up to families and their ethnic communities to preserve traditional culture amongst themselves if they value it. That is the same no matter what heritage is the question.  Many groups do this by living or working in close proximity – such as in Chinatown, or Dearborn, Michigan – or even ethnic neighborhoods within a large town. It is a very normal thing for humans to do.

But no other community has asked the federal government to enforce cultural compliance to that community.  The federal government has NO right to be forcing a heritage or culture onto an individual or family.  Contrary to what Congress assumed, my children are NOT the tribal government’s children – nor are they “commerce” under the “Commerce Clause” the ICWA was based on.

To those who constantly parrot that “white people” are “stealing” THEIR children, Wrong:  TRIBAL GOVERNMENTS are currently stealing OUR birth children.

Targeting other people’s kids to bolster membership rolls might be easier than doing the work necessary to keep your own children within the reservation community – but that isn’t something we are standing for anymore.

Reality Check: 75% of tribal members, according to the last two U.S. Census’, do NOT live in Indian Country. Some continue to value the reservation system and culture, but by your own admission – with your own statistics, such as losing 4 Indian languages a year – that is individual tribal members choosing NOT to speak the language. To continue blaming it on “white” people is disingenuous.

How can that I say that?  While taking Ojibwe language classes for a year to learn more about my husband’s culture – I attempted to encourage our household to speak it more.  Boy, was I in for a surprise.  My husband who spoke it fluently from birth, wasn’t interested in sharing it. His teenage nephews, who I was raising at the time, weren’t the least bit interested in learning it. And you know what? THAT was their choice! My husband was a man – my nephews were free individuals. No one has a right to force them to conform to what tribal government thinks is best.

If people are leaving Indian Country and turning their backs on culture and the reservation system – that is something YOU are going to have to look inward to resolve.

Reality Check: Tribal members are individuals with their own hearts and minds – not robots ready to be programmed by the dogma spewed in “Indian Country Today.”  Further, they are U.S. Citizens – and many, despite the rhetoric of a few – value being U.S. citizens.

If people are turning their back on traditional Indian culture and embracing American culture — that’s life.  (Go ahead and screen shot that and share it with your friends. They need to wake up to reality as well.)

Those yelling and screaming about it being the fault of “white” people who adopted babies and the fault of boarding schools from 50 years ago and the fault of everyone else – need to wake up. Free-thinking individuals have been taking their kids and leaving the reservation system in droves for decades. It is no one’s fault. It is life.  It’s probably even the REAL reason ICWA was enacted. (blaming the exodus on White adoptive homes just sounded better – there was more of a hook in it than “our people are simply taking their kids and leaving.”)

Reality Check: Stealing babies won’t solve the problem because many of them will grow up and leave as well.

Extending membership criteria to match that of the Cherokee Nation – as 60 tribal governments are currently considering doing  – won’t solve the problem either. It is only going to further open the eyes of the rest of America, and further anger those of us who do not want oppressive and predatory tribal govt touching our children, grandchildren, or great-great grandchildren.

You can NOT force other families to submit to your value system. That is why ICWA is totally unconstitutional. You are attempting to force many people of heritage to preserve something they have personally decided isn’t of value to them.

Now – I realize that you are going to turn that statement around and make it about ME – claiming I am out destroy tribal culture and commit Genocide and again totally ignore the fact that tribal members themselves are fleeing Indian Country.

Please note what I factually said. I said you can’t force tribal members who are not interested in preserving the culture to submit to the demands of the few who DO want to preserve it. You are forcing your values down the throats of people who have decided to live differently and have chosen to raise their children differently.

Example. I have a niece that is 50% Native American, 50% African American, who has decided to be Muslim and raise her children Muslim.

That isn’t me doing it.  She knows her Uncle wanted her to know Jesus.  That is an individual making her own decision – no matter how her uncle would feel about it – or how tribal Government feels about it.

If you want to believe it is “Un- Christian” to side with individuals, families, and human rights over horrific Government oppression – than so be it. I am tired of hearing the accusation that we aren’t being “real” Christians.

Are you suggesting that Jesus threw money-changers out of the temple and called Pharisees “Dogs” because he was timid and didn’t want to offend anyone?

Or that he was hung from the cross because everyone loved hearing what he had to say?

No, actually, this is what being Christian is about:

Ps. 82:3-4 (Psalmist to the kings) ”Defend the cause of the weak and fatherless; maintain the rights of the poor and oppressed. Rescue the week and needy; deliver them from the hand of the wicked.

Prov. 29:7 “The righteous care about justice for the poor, but the wicked have no such concern.”

Prov. 31:8-9 “Speak up for those who cannot speak for themselves, for the rights of all who are destitute. Speak up and judge fairly; defend the rights of the poor and needy.”

Isa. 1:17 “learn to do right! Seek justice, encourage the oppressed. Defend the fatherless , plead the cause of the widow.”

Isa. 10:1-3 (God, through Isaiah, to the Israelites) ”Woe to those who make unjust laws, to those who issue oppressive decrees, to deprive the poor of their rights and withhold justice from the oppressed of my people, making widows their prey and robbing the fatherless. What will you do on the day of reckoning, when disaster comes from afar? To whom will you run for help? Where will you leave your riches?

Jer. 22:16-17 “He defended the cause of the poor and needy, and so all went well. Is that not what it means to know me?’ Declares the Lord, ‘but your eyes are set on dishonest gain, on shedding innocent blood and on oppression and extortion.”

Acts 5:29 “Peter and the other apostles replied: ‘We must obey God rather than men!”

Jn. 15:18-21 “If the world hates you, keep in mind that it hated me first. If you belonged to the world, it would love you as its own. As it is, you do not belong to the world, but I have chosen you out of the world., That is why the world hates you. Remember the words I spoke to you: No servant is greater than his master. If they persecuted me, they will persecute you also. If they obeyed my teaching, they will obey yours also. They will treat you this way because of my name, for they do not know the One who sent me.”

Matt 5:10-12 “Blessed are those who are persecuted because of righteousness, for theirs is the Kingdom of Heaven. Blessed are you when people insult you, persecute you and falsely say all kinds of evil against you because of me. Rejoice and be glad, because great is your reward in heaven, for in the same way they persecuted the prophets who were before you.”

Col. 3:24 “since you know that you will receive an inheritance from the Lord as a reward. It is the Lord Christ you are serving.”

My husband and I prayed for years about what we were saying and doing and long ago came to the solid conclusion that it was the right thing to do before God. This org can’t be bullied about it now.  We are past it. 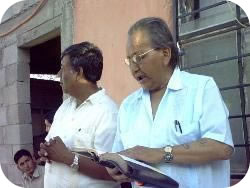