Some wonder why Capobianco supporters don’t side with a father whose child is being taken from him. Some have even questioned the authenticity of Christians who would support the Capobiancos. (Forgetting that even Jesus was raised by an adoptive father.)

One must understand that many Capobianco supporters have been there since the day they first saw, either in person or on video, the horror of not only having one’s child taken, but –

1) taken without the benefit of a caring transition, and –

2) taken solely due to 1% heritage, (as the father’s admitted abandonment of the child would have prevailed otherwise.)

Since then, the Cherokee Nation has put on a show, shaking signs that claim “genocide” and claiming that “white people” are stealing “Indian” babies.

If a C supporter brings up the 1% heritage, their statement is twisted and they are accused of racism – despite that it was the Cherokee Nation that brought the 1% into issue.

As much as the Cherokee Nation, ‘Indian Country Today’, NICWA, NARF, and others want to spin it as a “citizen” issue – it is not spinning. Very few people – including many tribal members in Oklahoma and elsewhere – are falling for the “citizen” claim – especially when “citizenship” is being forced on children.

Ardent supporters of the Cherokee Nation, either purposefully spinning for PR or snowed by their own rhetoric, fail to see how disgusted many others are by the claim that “white people” are stealing “Indian” babies.. Many Americans can see that claim for the dishonesty it is – but few have wanted to speak it. While it is okay for a tribal entity to speak in terms of race and percentages, it is deemed “racist” for anyone else to. But I will say what is on the hearts of many. This was no Indian Child being stolen by “White” people.

It was a Caucasian/Hispanic child, stolen by a tribe.

That is the bottom line.

As the Cherokee Nation continues to encourage and assist Mr. Brown in defying state and federal law, it is an overtly obvious fact. And that is why the Cherokee Nation and tribal governments in general aren’t getting the traction on their genocide spin (outside of  ‘Indian Country Today’) that they somehow thought they would.

When you are talking about OUR children – which this child was – NOT an Indian child – you should expect hostility when trying to claim that child as the Tribe’s.

AND if 60 more tribal governments attempt to lower their membership criteria – as 60 are talking about doing – to CN levels and begin to target children of minute heritage – as the Cherokee Tribe has – they should not expect to get sympathy. They should expect a strong push back.

They should expect push back because now, due to the Veronica horror – a whole lot of Americans who would have otherwise remained oblivious to the issue, have woken up to what is happening and are outraged by the ICWA stories they are hearing. Many now want ICWA to be repealed.

So do we feel angry? Yup.

Is there a Christian purpose and righteousness in that anger? Absolutely.

– “And they were bringing children to him that he might touch them, and the disciples rebuked them. But when Jesus saw it, he was indignant and said to them, “Let the children come to me; do not hinder them, for to such belongs the kingdom of God. Truly, I say to you, whoever does not receive the kingdom of God like a child shall not enter it.” And he took them in his arms and blessed them, laying his hands on them.” (Mark 10:13-16 ESV)

Having raised nine tribal members, five of whom are my birth children, and seen much tragedy, child abuse, sexual abuse, suicide, and other horrors on more than a few reservations – and having an advisory board and membership of parents who have raised, adopted and witnessed the same – we know far too much about tribal governments seeking children for the federal dollars, then showing little or no interest in what happens to them once they have been “retrieved” for the tribe and placed with a member. We won’t be bullied or intimidated.

We have known of far too many kids abused in ICWA homes, and some even murdered.

(Don’t even try to argue that point with me; I had been an ICWA approved home myself for 17 years. I know how little the tribal social services paid attention.)

So, concerning this particular case, in summary – for those who are flabbergasted that we would not be supporting the father – understand this: from the get-go,

1) Mr. Brown has been seen as an extremely selfish man.

2) The Cherokee Nation has been seen as an extremely selfish organization – using this child as a political pawn.

How in the world are we expected to sympathize with people who do that?

Elizabeth Sharon Morris is Chairwoman of the Christian Alliance for Indian Child Welfare, columnist for Women’s Voices Magazine, and author of ‘Dying in Indian Country.’ http://dyinginindiancountry.com a dramatic true story of transformation and hope.

When Supporters ask what I need… 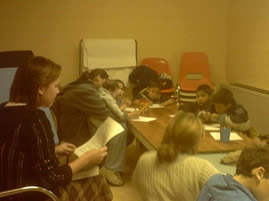