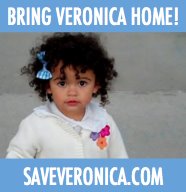 Christinna Maldonado chose Matt and Melanie Capobianco to love, nurture, and raise her soon-to-be-born child. The Capobiancos had long wanted to be parents and after seven failed in vitro fertilization attempts, made the decision to enter into an “open adoption” of Baby Veronica. On all accounts. Veronica was a happy, thriving, child residing in a stable, nurturing environment. To this day, Maldonado remains committed to her choice.

On or around Jan. 4, 2010, Dusten Brown, the biological father, signed away custody of his daughter in exchange for not having financial responsibility. Brown later changed his mind and sought custody of Veronica. Initially, due to South Carolina law, he was denied standing because he was considered an absentee father.

However, because he was 3/128th Cherokee heritage, the Cherokee Nation intervened in the adoption proceedings and argued that this happy, healthy two-year-old be transferred to Brown under the 1978 Indian Child Welfare Act.  Baby Veronica, only 1.12% Cherokee heritage, was ordered removed from the Capobianco’s care and placed in Dusten Brown’s custody. On Dec. 31, 2011, despite abundant evidence from child psychologists and attachment experts that removing toddlers from care-givers they’ve bonded to could cause long-lasting psychological damage, Veronica was handed over to her biological father.

Though supporters of ICWA say it has safeguards to prevent misuse, Veronica and numerous other multi-racial children across the U.S have been hurt by it – many of whom have never been near a reservation nor involved in tribal customs. Some opponents of ICWA question the motivation for seeking after children whose families have chosen to be disconnected from Indian Country. The Cherokee Nation alone had over 100 attorneys targeting some 1,500 children across the country in 2012.

Now Veronica’s case has reached the highest level.  On February 26, 2013, the Christian Alliance for Indian Child Welfare filed an amicus brief with the United States Supreme Court in support of Matt, Melanie and Veronica. SCOTUS will hear testimony of the case on April 16th and will make a ruling by the end of the term in June 2013.

CAICW is asking the Supreme Court to reverse the decision made by the high court of South Carolina and return Baby Girl Veronica to the Capobiancos, family chosen for her by her birth-mother. The statutory and constitutional issues addressed in this case impact the equal protection, due process, liberty, and state rights provisions of children in need of care. A child’s best interests should be considered in every child custody determination.  There is no presumption that residing with members of a child’s tribe is in the child’s best interests, particularly when the child is lives off the tribe’s reservation. Further, tribal governments lack inherent jurisdiction over nonmembers. Application of the federal ICWA to cases involving the parents who are not tribal members violates the equal protection provision of the U.S. constitution, even if a non-member parent lives within reservation boundaries.

If you have any doubts to the how justice should rule in this case – consider Christinna, who is 50% Hispanic (if her heritage isn’t important, but another persons supposed minute heritage is, isn’t that….racism?)

SHE was the one in the position of being an unwed mother – told by the biological father that he was not going to help support the baby she was carrying. No one else in this case was in that position. (But if what she went through isn’t important, but the father’s belated “pain” is, isn’t that….sexism?)

Then imagine if this had been your daughter, sister, or niece who had made the mistake of sleeping with a man who later refused to help with a child.  Now pay attention.  This man appeared to be Caucasian.  So at some point he mentioned that he has Cherokee ancestry. However, in the time your daughter was with him, he never made an issue about being Indian, practiced anything traditional, or gave any cause to assume he was anything other than the myriad other Caucasians across the United States who claim to have Cherokee blood. Yes, those people of minute heritage who many tribal members of significant heritage mock  as “wannabe” Indians.

Now, imagine you and the rest of your family had supported her decision to move ahead with adoption and helped her find a good home for this child.  Then imagine a tribal government coming in weeks, months or years later, and telling the courts that this man has 3/128th heritage, and based on this tiny bit of blood quantum, this man many tribal members would have mocked if it weren’t for Veronica –  is now “Indian” and they are there to invalidate the decision your family had made.

What the Cherokee Nation is pushing for and the South Carolina Supreme Court erroneously overlooked – is that any woman, of any heritage, who sleeps with any man of any apparent heritage – even a one night stand – CANNOT go ahead with an adoption without somehow ensuring that this man does not have a smidgen of tribal heritage.

WHAT does this kind of ruling do for the rights of women – of unwed mothers?  What kinds of hoops will teenage girls now have to go through if the Supreme Court rules for the tribal governments? Where is the outrage from women’s groups over this case?

And yet – no one would say a thing of she opted to abort her baby instead.  The tribal government wouldn’t – couldn’t stop her from doing that.   Just consider the ramifications of a tribal government victory in this case.

Our Families are NOT Chattel for tribal governments – no matter how many claim them to be.  As parents, we will continue to fight for full rights and freedom for our families – every one of whom is a United States Citizen – even if this Supreme Court makes the wrong decision.

In the words of Dr. William Allen, former Chair, US Commission on Civil Rights (1989) & Emeritus Professor, Political Science MSU, “… we are talking about our brothers and our sisters. We’re talking about what happens to people who share with us an extremely important identity. And that identity is the identity of free citizens in a Republic…”

PLEASE REMEMBER TO PRAY NOW THROUGH TUESDAY – for Veronica, her parents, and all involved with this important decision.

Elizabeth Sharon Morris is Chairwoman of the Christian Alliance for Indian Child Welfare and author of ‘Dying in Indian Country: A Family Journey From Self-Destruction To Opposing Tribal Sovereignty.”

To Clint and Heather Larson