.
In 1989, the US Supreme Court declared in Mississippi Band of Choctaw Indians v. Holyfield that tribal jurisdiction preempted both state authority and the wishes of parents. The Court concluded an Indian tribe and an Indian child have an interest in maintaining ties independent of the interests of birth parents, and thus, “Congress determined to subject (voluntary) placements to the ICWA’s jurisdiction …because of concerns going beyond the wishes of individual parents.”

They then made the chilling statement, “These concerns demonstrate that Congress could not have intended to enact a rule of domicile that would permit individual Indian parents to defeat the ICWA’s jurisdictional scheme simply by giving birth…off the reservation.”

Therefore, whether a parent is four-quarter Indian or totally non-Indian, ICWA states, “… the Indian tribe shall retain exclusive jurisdiction…” and if a tribal entity requests, “…the (State) court…shall transfer … to the jurisdiction of the tribe…”

In essence, Congress has consigned our children to tribal government, and opting out is not an option. We could refuse to enroll our children into the tribe, but a child does not need to be enrolled in order for ICWA to apply. ICWA pertains to any child the tribe deems enrollable.

Thus, many more children and families are affected than even realize it. Tribal governments have the right to define their membership. This means they have a right to decide the percentage of blood needed for enrollment. Most tribal constitution require one-quarter blood quantum for membership, but some allow membership with as little as 1/64 blood quantum.

Therefore, up to 3/4 or more (in some cases 63/64!) of a child’s non-Indian heritage can be legally ignored by the courts, and tribal governments have been allowed jurisdiction over children with the smallest amounts of Indian blood.

The truth is, many tribaly enrolled parents have left the reservation because they don’t feel it is the best place to raise their children. (According to the US census, almost 80% of those classifying themselves as Indians live off reservations.)

Steve Moore, a Staff Attorney with Native American Rights Fund, estimated that 1.96 million people of Indian ancestry live off the reservations. He said that puts the tribal courts at a disadvantage in custody cases. Turning a blind eye to individual rights, he further stated,
“There’s been an obvious effort by state court judges to create loopholes and exemptions to the point that I believe Congress needs to take the matter up again.”

“The bottom line is Indian children are the lifeblood of Indian tribes as a population base diminishes due to these cases.”

There is no mention in the article as to why 1.96 million persons of tribal heritage have chosen to live off the reservation.

Most people in America enjoy the freedom to raise their children as they see fit, even if it is contrary to the way their extended family is raising children. Those parents also have the right to name a guardian for their children who will raise them in the manner they desire. They can put that choice in their will and have those wishes honored.

Shouldn’t the parents of tribally enrollable children have that right as well?
.

In re Bridget R. 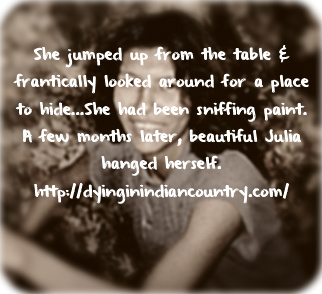