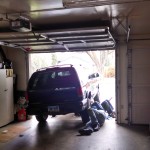 CAICW hits the road to advocate for families in their struggle for life, liberty, and the pursuit of happiness
by Elizabeth Sharon Morris

This past October, after a loving friend kindly donated much needed maintenance for my hobbled vehicle, I loaded my car with a few essentials—laptop, camp stove and sleeping bag—and with just a few hundred dollars in pocket, headed south, not knowing exactly where God would lead or how long I’d be gone.

After more than a decade of desk advocacy, along with a few short trips to Washington, D.C., few dents in the system we’ve been fighting have been made. Worse, the stories of abuse have been increasing. If we’re going to fight this bear – it’s going to take more than we’ve been doing.

Three months earlier, I had read Corrie ten Boom’s book, “Tramp for the Lord.” Her faith following her horrific ordeal during the Holocaust was amazing. Her determination to do whatever it took to make a difference was inspiring.

I’d actually felt a need to plunge in fully for a long time. The work involved in this is overwhelming. As many know – I am usually running way behind, trying to catch up. It has been more than I’ve been able to handle while still raising kids and finding ways to pay bills. But the kids are raised now. So – I decided to step out and trust God.

While traveling, I planned to visit families CAICW’s been involved with. The first night out, I stopped to see one of Roland’s relatives in the hospital and spent the night with a niece. I was sadly reminded over the 24 hours just why Roland and I became concerned in the first place.

God is good. The needs for this work have been met in ways we never dreamed. In North Carolina – a dear old friend had a new transmission put in my car and went out of her way to help in other ways as well. I then spent six weeks in Virginia at the home of a wonderful host family and got to know the metro rail into DC pretty well.

While there, CNN broadcast a segment concerning child sexual abuse at Spirit Lake, and ACF Regional Admin Tom Sullivan released a letter admonishing his DC superiors. With these tools in hand, I visited every Senate office and several house members. We created new relationships with some staff members and learned which offices are open to help. We were able to teach various offices about issues in Indian Country – and various offices were able to teach us a few things.

While there, I also continued to hear stories from one person or another of horrible things happening to children – right under the eyes of federal government officials. Feeling helpless, the thought coming to mind again and again was “This kind of thing comes out only through prayer and fasting.”

In mid-December, I returned to North Dakota for Christmas, where my kind friend again did an oil change on my car. Having been asked several times by a good friend to come out to California and spend some time praying, I decided to do it – as well as try to catch up on necessary office work before going back to DC.

I have been in California now since mid-January. I have had wonderful times of prayer, working on our database, writing, and putting together a business plan for the Roland J. Morris Sr. Ranch – a place for families to come as a unit for long term help away from drugs and alcohol. I’ve also been reading three books – “Blessing Your Spirit,” (Devotional) “Preaching in Hitler’s Shadow” (10 sermons by Pastors during the Holocaust, including Bonhoeffer) and “Fatal Link” (The epidemic of fetal alcohol in America, in particular within many reservation communities).

In California, two handsome men spent days and nights in their garage, donating tons more needed maintenance on my vehicle. I’ll be leaving California with practically a new car at the beginning of March. While traveling back to DC, I will stop to see families along the way as well as look at potential properties for the RJM Ranch. I plan to be back in DC in late April. There are many things I’ll write about along the way – posting to our blog page at caicw.org.

I urge you, family and friends, to share this information and encourage others to join in the ongoing struggle. The struggle and battle is so much larger than Roland and I even imagined when we embarked on this mission many years ago. But God is good and amazing things are happening. Please join us.

I had a discouraging meeting that morning. A senior staffer in Indian Affairs office was calling Tom Sullivan a liar. I think he thought maybe I didn’t know one way or the other – like I had just picked up Sullivan’s reports and decided to use them. He told me Tom no longer worked at that job. I told him, “Yes he does.”

The staffer then said it wasn’t true anyone forbade Tom write any more reports concerning the child abuse. I told him, “I heard it from Mr. Sullivan’s voice to my ear.” Then he said something about how a hearing would prove it isn’t true. I didn’t respond, but wanted to tell him, “Bring it on.”

They ended the meeting with the predictable, “Thank you for the information. We will keep it in consideration.”
After the meeting, I sat in the atrium of the Hart building, discouraged, and thought about what a huge monster this was. Those two people are high up in Indian Affairs and probably reflect exactly what the bulk of the committee really thinks.

If it weren’t for knowing how much God has been helping us – and how God made it amazingly possible for us to be in DC – I would have felt like giving up.

Two hours later, I received an email forwarded from Betty Jo. It was from Tom Sullivan to his superiors in DC – written within the hour. Interestingly, it addressed all points of contention in my morning meeting. With a lot of pleasure, I forwarded it to the cynical staffers at Indian Affairs. As far as I can help, our children will NOT be treated as collateral damage in DC’s ongoing political games.