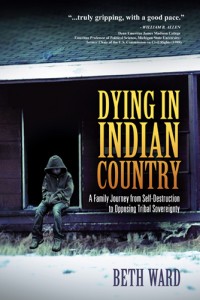 From Tragedies – to Transformation…

Just why would a family decide that reservation life is not what they choose for their family? The reasons are many, but some of the reasons are shocking.

Dying in Indian Country is one family’s story of  hope.

What cannot be denied is that a large number of Native Americans are dying from alcoholism, drug abuse, suicide and violence. Further, scores of children are suffering emotional, physical and sexual abuse as a result – and the Indian Child Welfare Act is trapping more and more children into this unacceptable system.

While many tribal governments continue to fund congressional candidates who promise to increase tribal sovereignty, the voices of the children who are at the mercy of corrupt government continue to go unheard.  The truth is that some tribal governments are not protecting the children in their “custody.”  Instead, they are gathering children where they can because federal funding allocations are based on the U.S. census and tribal rolls.

An amazing transformational story, Dying in Indian Country, by Elizabeth Sharon Morris, provides a real glimpse into some of these unacceptable conditions. Dying in Indian Country tells a compelling true story of one family who after years of alcoholism and pain, comes to realize that corrupt tribal government, dishonest Federal Indian Policy, welfare policy, and the controlling reservation system has more to do with the current despair than the tragedies that occurred 150 years ago  –  then tells how, by the Grace of God, they came out of it.

A true story of pain, hope, and transformation –

“Dying in Indian Country is a compassionate and honest portrayal… I highly recommend it to you.” Reed Elley, former Member of Parliament, Canada; Chief Critic for Indian Affairs in 2000, Baptist Pastor, Father of four Native and Métis children

“He was a magnificent warrior who put himself on the line for the good of all…I can think of no one at this time, in this dark period of Indian history, who is able to speak as Roland has.”  Arlene,Tribal Member

Dying in Indian Country is available at:   http://dyinginindiancountry.com

One Response to “Dying in Indian Country: A Family’s Painfully True Story”