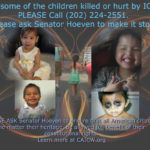 Three-yr-old Lauryn Whiteshield was murdered a little over a month after her arrival to her grandfather’s home in the spring of 2013.
This twenty minute video examines the effect of federal Indian policy on the lives, liberty, and property of U.S. citizens across America.
Although the last two U.S censuses show that 75% of tribal members do not live within Indian Country and many have never had any association with the reservation system, federal policies mandate tribal government jurisdiction over individuals of lineage in several areas.
1) Across America, children who have never been near a reservation nor involved in tribal customs – including multi-racial children with extremely minimal blood quantum – have been removed from homes they love and placed with strangers. Some children have been severely hurt in the process.
2) Women victimized by violence can be denied the option of county court, regardless whether they believe justice cannot be obtained in tribal court.
3) Further, the Department of Interior holds title to the property of millions of individual tribal members. Adult citizens are not allowed to sell or use their property as collateral without permission.
This study looks at the practical impact and documented repercussions of policies that, based solely on a person’s lineage, set limitations on what they may do with their lives, children, and property.

PLEASE also share with YOUR Congressmen. MANY of them take a stand on all kinds of things – from orphans in Russia to immigrants and refugees from overseas. DEMAND that they take a strong stand for children in the United States – CITIZENS subject to abuse by a law they – Congress – created and MUST remove.

Most especially – share your thoughts on this video with the Chairman of the Senate Committee on Indian Affairs – Senator John Hoeven.

.
Contrary to the belief of those that want control over our children, the Indian Commerce Clause did not give Congress the right to enact a law giving those entities that control.

Professor Rob Natelson, Constitutional Law Professor at the University of Montana, Missoula, researched the issue in 2007. The results of his study were documented in a lead article published in vol 85 page 201 of Denver University Law Review (85 Denv. U. L. Rev. 201 (2007)

According to Professor Natelson, “the U.S. Constitution gives Congress only limited powers, and it says nothing about legislating for “Indian child welfare.”

So what gives Congress the power to pass a law like the ICWA?

His answer: Absolutely not.

Professor Rob Natelson is one of the country’s top experts on the original meaning of the Constitution. He concluded that the purpose of the section giving power to Congress to regulate commerce with the Indian tribes was to allow Congress to regulate trade between Indians and whites – no more. Foster care, adoption, parental rights, etc. were be governed by state law, not federal law.

Professor Natelson documented his findings in a lead article published in Denver University Law Review. He also examined other claimed bases for laws like the ICWA, including the “Indian trust doctrine” – and he found they didn’t have any merit, either.

“There is not much doubt on the question,” he said. “At least according the Founding Fathers, Congress had absolutely no authority to adopt the ICWA. Eventually, the courts may see their error and strike it down as unconstitutional.”

This article – and some of Professor Natelson’s other research – can be found at www.umt.edu/law/faculty/natelson.htm

“Government agencies and pressure groups campaigning for more taxpayer money can create a fictitious “history” almost overnight. First, they make some claim about how something has been recognized since (whenever), and before you know it, journalists are uncritically repeating it, and it is plastered all over the Internet.

“Recently I’ve seen a burst of allegations that the U.S. government assumed a treaty obligation in 1787 to provide reservation Indians with free health care. If you Google “health care treaty Indian 1787,” you will find a long list of sources – including supposedly objective news stories – making that assertion. Here’s a sample from Montana’s Lee newspapers: “A treaty dating to 1787 requires the government to provide tribal members living on reservations with free health care.”

“Now when presented with such a claim, a journalist’s crap-o-meter should start sounding like a fire alarm, because the claim is so inherently improbable. First, the reservation system as we know it didn’t exist in 1787. Second, the cash-strapped Confederation Congress would not have had the resources to meet such a commitment. (Remember that shortage of funds was one reason Congress called the constitutional convention.) Third, a treaty is a bilateral document – even if the Confederation Congress had committed itself to provide health care to the Delaware tribe, for example, it wouldn’t follow that the government had committed itself to provide health care to all Indians for all time.

“So I checked into the claim and found that — sure enough — it is flatly false. Here are some details:
* According to Charles Kappler’s authoritative collection of treaties between the U.S. Government and Native American tribes, there was no such treaty in 1787. In fact, 1787 was a year in which no U.S.-Indian treaties were signed at all!

* There were over 20 U.S.-Indian treaties before 1800, but none obligated the federal government to provide Indians with health care, free or otherwise.

* The last U.S.-Indian treaty was signed in 1868. Some of the later ones provided that the government would pay annuities to some Indians – but often even this term was left discretionary with the government. Neither my own search nor the Kappler index of all treaties disclosed any reference to a treaty obligation to provide free (or any) health care.

We can’t blame the myth wholly on activists and inattentive journalists, however — the U.S. Government bears some responsibility as well. The journalist who authored the story quoted above referred me to a PR webpage from the U.S. Indian Health Service. It states: “The provision of health services to members of federally-recognized tribes grew out of the special government-to-government relationship between the federal government and Indian tribes. This relationship, established in 1787, is based on Article I, Section 8 of the Constitution, and has been given form and substance by numerous treaties, laws, Supreme Court decisions, and Executive Orders.”

Now, this statement certainly does not say that any treaties created an obligation to provide free health care. But it has problems of its own. It repeats the false 1787 date. And by stating that the Indian-federal “relationship” has been “given form and substance” by . . . treaties,” it implies that treaties created an obligation to provide health care, although they have not.

The website refers to Article I, Section 8, a part of the Constitution that creates congressional powers (not treaty obligations). Clause 3 of that section provides in part that “The Congress shall have Power . . . to regulate Commerce . . . with the Indian tribes.” It is true that Congress claims this “Indian Commerce Clause” gives it plenary authority to regulate Indian affairs. But as I have shown elsewhere, the only authority this provision actually granted to Congress was a power to regulate trade between tribes and non-Indians. It certainly did not confer authority to turn tribes into wards, to meddle in internal tribal affairs, or to put tribal members on the federal dole.

This entry was posted on Tuesday, June 30th, 2009 at 1:56 pm and is filed under Blogging. You can follow any responses to this entry through the RSS 2.0 feed. You can leave a response, or trackback from your own site. “