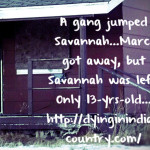 Re: Administration for Children and Families Missing and Murdered Native
Americans Framework

We are writing in response to your request for comments on the Administration for Children and Families (ACF) Missing and Murdered Native Americans (MMNA) Framework.

The Christian Alliance for Indian Child Welfare is a Christian ministry and family advocacy dedicated to the safety and welfare of children and families affected by federal Indian policy.

Your framework states that the crisis is a result of the insufficiency of programs meant to target the housing, lack of employment, mental and physical health care, nutrition, and education of tribal members. We believe the problem does not lie in the insufficiency of government programs or funding. There is already too much of both. We believe the problem lies in not recognizing and addressing the root of the crisis. In fact, this crisis might not benefit from intervention by the ACF, a social service agency, at all.

CAICW holds that all United States citizens are individually guaranteed a personal and distinct right to life, liberty, and property, and that no government on earth can remove those rights. We welcome a federal administration that views citizens who are eligible to be tribal members as individuals with separate and unique visions and needs, not as property of a tribal government or as a caricature of who authoritarians claim them to be.

(1) The level of crime and alcohol/drug abuse condoned in many reservation communities has direct correlation to the health and safety of women and children.

Required to address the crisis:

(1) Provisions to control crime and drugs.
a. This tends to get lost in a focus on the “background” or “underlying” public health conditions; and
b. Trying to put everything under the rubric of public health leads to treating the issues indirectly rather than directly, implying as it does that people need treatment rather than protection.

(2) Provisions to address corruption of leadership on many reservations
a. This is rarely addressed by the federal government.
b. This is vital, as leadership affects the temperament of a community. Further, there are cases in which leadership themselves are complicit to abuses – as public testimony showed at a Spirit Lake town hall meeting in February 2013 and in witness testimony to the House Subcommittee on Indian, Insular and Alaska Native Affairs in June 2014.

(3) Provision for protection of women and children:
a. Tribal governments need to partner with proven organizations (such as Operation Underground Rescue, Veterans for Child Rescue, and others) to combat sex trafficking on reservations. These organizations have toolkits already to go, as well as resources to conduct operations to rescue victims. All they need is an ok and request from a tribal entity to partner with them.

b. REQUIRE ALL EMPLOYEES in tribal governments, police, social services, schools, courts and hospitals and ANY PROGRAMMING RELATED TO CHILDREN’S AND WOMEN’S ACTIVITIES to pass strict background checks. Anyone with any record related to domestic or sexual abuse should not be allowed to serve in these positions. Permanently fire any employee convicted of domestic or sexual abuse of any person.

c. Set up a National hotline/safehouse mechanism so that tribal victims can report abuse without fear of retribution from their community or corrupt state entities that are partnering with tribes. This hotline should not be run by the federal, state, or tribal governments or agencies and organizations beholden to them. It should be a system that uses groups mentioned in action item #1. Funding these groups would allow them to set up regional outposts that can quickly and effectively rescue and provide victim services.

d. Provide a mechanism for victims to emancipate themselves from their tribal community if they so choose.

Lastly, government at all levels needs to stop using tax dollars to fix problems created by earlier tax dollars. Government has viewed tribal families (and all other families) as wards of the state. This view was established in the 1930’s by Felix Cohen and the Roosevelt administration and has proven nothing but disastrous. The federal government implemented programs and appropriated funds that created dependency and destroyed personal responsibility and the role of parents. Government agencies then implemented more programs and appropriated more funds for yet more bureaucracy in attempt to address the problems created by the first wave of programs and funding. Each layer of additional programs and bureaucracy has only added to the crisis – never solving anything – as evidenced by the last 90 years of increasing crises in Indian Country under the Roosevelt era policies.

Governments–and government bureaucrats–do not make good parents. Intact families, with fathers who understand and honor their God ordained role as guide, protector, and provider — are the surest defense against having missing and murdered Americans. 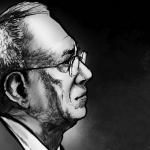